India VS England match in Birmingham 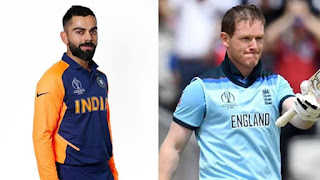 On Sunday a tough battle is going to be fight between India and England in Birmingham.India will  gear up to continue his unbeaten image in this world cup 2019.This game is a very tough and much needed win for the England team to retain in this series.

Team India is only one match away from qualifying for the semi finals.On the other hand England has to win his both 2 games against India and New Zealand for securing a berth in semi finals.Tomorrow's match will decide the future on 2 teams Pakistan and England came back into the world cup.

England is been placed at the 4 points in the tables with 8 points in 7 outings.They had to chased very much against SriLanka and Australia.