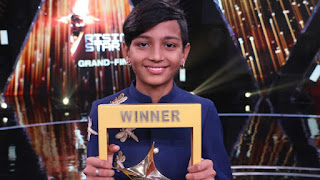 The 12 year old Aftab singh from punjab had became the winner of the T.V reality show Rising star 3,Aftab is a big fan of salman khan and want to sing for him in near future.He also wishes that one day definately he will sung a song for superstar salman khan.

On saturday the Grand finnale of Rising star 3 was live on Air,in which Aftab was declared as the winner for the season 3. Aftab said that," He did not expect to be in the final of the rising star it's a dream came true to him  in the reality.He would like to thank all the participant and judges for this victory,also to each and every person who had helped him to achieve this big stardom.

With the other 3 finalist ,Aftab had been awarded as the winner and been given 10 lakhs ruppes as a prize money for the winner.He also dedicate his victory to his father and mother by saying that they had done a lot for him to reach at such a state.