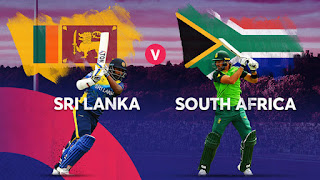 The 35th World Cup-2015 match is being played between Sri Lanka and South Africa today at River Side Stadium. Sri Lanka made 46 runs in 7 overs on a wicket.

The 35th World Cup-2015 match is being played between Sri Lanka and South Africa today at River Side Stadium. On the first ball of the match, Kagiso Rabada walked Sri Lankan captain Dimut Karunaratne. The team has made 14/1 in 2 overs.

35th match of ICC World Cup-2015 is being played between Sri Lanka and South Africa today at River Side Stadium. South Africa won the toss and decided to bowl first. South Africa has made two changes in its team, while Sri Lanka have one. In order to stay in the World Cup final-4, Sri Lanka will need to win all the matches in this match.

1996 winner is currently ranked 7th in the numerical list. It has two wins and two matches are like those which were canceled due to rain. If he wins South Africa in this match, then by 2 points, it will reach 5th place.

For this, Sri Lanka will have to expect that it perform like that, the way it did against England. Against England, this team also saved the target of 233 runs. Lasith Malinga was an important contributor in this win. Once again they will have great responsibility.

At the same time, there is nothing left except to save respect in this tournament for South Africa. In 1992, this team had stepped into the World Cup for the first time and the current performance was the worst performance ever in its World Cup. He has won just one match in seven games. The team, led by Faf du Plessis, is currently ranked 9th in the numerical position.