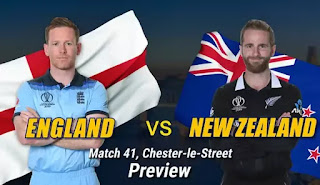 In the 41st match of the World Cup on Wednesday, hosts England defeated New Zealand by 119 runs at the Riverside Ground. In reply to England's 305 runs, the whole team of New Zealand was all out for 186 runs in 45 overs. Tom Latham was the highest scorer with 57 runs. With this, England made it to the semi-finals after 27 years. His 9 matches has 6 wins. Johnny Bairstow was given the Man of the Match for his century.

The English team has managed to make it to the semifinals for the first time since the 1992 World Cup. He has played 5 semi-final games so far. On the other hand, the New Zealand team played semi-finals 7 times. In the last World Cup, he reached the final by defeating South Africa, but could not make the champion.

Captain Ken Williamson and Ross Taylor were unable to do anything special in this match and were run out after one run. New Zealand's top order also failed in this match. Chris Woakes dismissed Nichols in the first over At the same time, Jofra  Archer caught Guptill at Butler's hand. Jofra Archer has become the highest wicket-taker in the world for a World Cup. He  broked the record of Ian Botham and Andrew Flintoff.

England first started the innings with the help of openers Johnny Bairstow and Jason Roy. Between the two, there was a century partnership for the first wicket. Roy was dismissed with half-century. However, Bairstow  completed his century, showing the best of the game ahead. He became the first batsmen to make two consecutive centuries for England in this World Cup. He also scored a hundred in the last match against India.

Bairstow and Roy made the third consecutive century partnership of this World Cup. Earlier Sri Lanka's Tillakaratne Dilshan and Kumar Sangakkara were able to do this in the 2015 World Cup. England's middle-class showed the average performance . Captain Eoin Morgan, Ben Stokes, Jos Buttler and Joe Root were not able to do anything special and lost cheap wickets. England, who were 206 for one in 32nd over, could not add 100 runs in the next 18 overs. During this, he lost 99 runs and lost seven wickets.