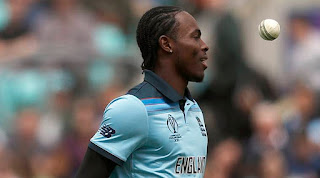 Jofra Archer had broken the record of Ian Botham

The English Cricket Board included Caribbean-born fast bowler Jopra Archer for his World Cup 2019 team. Jofra did not disappoint England and offered excellent bowling. Archer retained his consistency in all the league bouts played for England, and in his very first World Cup, he made a new history for England.

Jofra Archer has shown in his very first World Cup that he has many possibilities. He not only took wickets for his team but also prevented the opposition from playing openly on their own ball. During the league match against New Zealand, Jofra dismissed Martin Guptill as his best record. Jofra has now become the first bowler to take the most wickets in one season of the World Cup tournament from England. He left behind great player Ian Botham. Ian had taken the most wickets from England in the 1992 World Cup, and after 27 years, Jofra broke his record.

Most wickets taken by an England blower in world cup is as follows :-