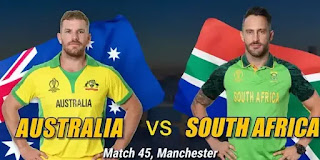 
Today South Africa has made 325 runs while playing against Australia,Currently Australia has been shifted to 2 nd position in the table.This is the 45th match played in manchester.
Du plessis had scored a century i.e 100 runs in 94 balls,Van DER Sussen had made 95 runs on 97 balls,De cock had made 52 runs Against Australia.

Currently David warner is on the pitch by making 67 runs on 76 balls and after losing 4 wickets australia is on 119 runs after 24 overs.Maxwell got caught behind by the wicket keeper.