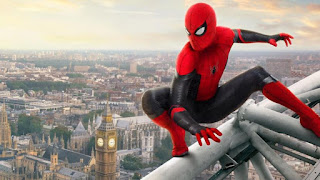 Almost two and a half months ago, 'Avengers Endgame' was released in which Tony Stark had said goodbye. In this new film of Spiderman, Tony continues to discuss and reminds the audience of 'Endgame' in the minds of the audience. 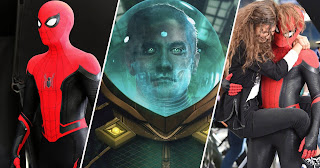 Peter Parker as Avangers i.e. that Spiderman (Tom Holland) still exists. She is studying in school. It has its own struggles against teenage. He wants to hide his identity as Spiderman and we also like the gentle MJ (Jendaya). Peter needs a break and at the same time he travels to Italy through school trips.
As soon as Venice arrives, phone calls to Nick Fury (Samuel Jackson) comes to Peter. Parker gives Furry, Tony Stark's glasses, which is equipped with Artificial Intelligence. Tony believed that the rightful owner of this glasses is a parker.


A new danger hinges on the world, and Nick wants that Peter Parker fought it. Mysterio helps a lot in this work, and Parker impresses her and gives her Tony's glasses to Mysterio. And this is what the Parker's world of Twist goes up and down.


The story of the film does not appeal too much. It runs on two tracks. It's Confucius and mistakes for Teenage Parker and his attraction to MJ, superhuman heavy responsibility at the young age. This part of the film is entertaining. There are many light-hearted scenes that provide freshness to the film. Parker's innocence and innocence touch the heart of the audience.


The second track revolves around Tony's glasses. Although it is not strong, but its twist is strong and this kind of rocking is not expected when watching a movie. The action is also tremendous and the 'cheating' or 'illusion' that has been created in front of Peter is fantastic. Some stunts and special effects are strong and new ones.As director, director John Watts has kept the balance of the story. They did not overreact to comedy, romance and action. The good thing is that the action does not allow the story to dominate.

The film is filmed in countries like England, Italy, Netherlands, Germany, Austria, Czech and has been shot in the best manner. Technically the film is extremely strong. Action scenes are presented with cleanliness. Background music is fantastic.

Tom Holland is an extraordinary actor and takes charge of such a big film on his shoulders. His acting in the emotional scenes is worth watching. All the actors, including Jendaya, Samuel Jackson, have paid their own rolls in a fine way.