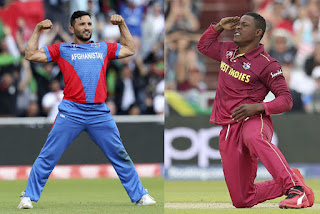 
West Indies face Afghanistan in Leeds in the 42nd World Cup league match. In this match, the West Indies defeated Afghanistan by 23 runs. With this defeat of Afghanistan, the world cup farewell without winning any match.

In this match West Indies captain Jason Holder won the toss and decided to bat first. Earlier, batting first, West Indies lost 6 wickets in 50 overs and scored 311 runs. At the same time, chasing the target of 312 runs, Afghanistan's team collapsed on 50 overs 288 and the match was lost by 23 runs. It was Afghanistan's 9th consecutive defeat in the 12th season of the World Cup.

Chasing the target of 312, Afghanistan felt the first blow to Captain GulbadinNayeb. Nayebmade 5 runs in 6 balls and Kemar Roach was caught by Ewan Lewis at the hands of the ball. After this Rahmat Shah and wicket-keeper batsman Ekram Ali Khal completed the half-century. But, Rahmat Shah Carlos Brathwaite was caught out caught by Chris Gayle at the 62-run private score.
Afghanistan's third blow was as wicket-keeper batsman Ikram Ali Khan. Iqram Ali scored 86 runs and Chris Gayle  bowledhim LBW. Najib was also run out in the same over. Najib scored 31 runs, brathwaite and hemmeer runs out at the throw. After that Mohammed Najib  2 runs and Kemar Roach  caught Fabien Allen at the crease.

Afghani wicket felt the sixth blow to the team as Simeullah Shinawari. On Saturday, Kemar Roach scored a hat-trick of Hometown after scoring 6 runs. The seventh shock was felt as Asghar Afghan. Asghar scored 40 runs out of the hands of the holder at the hands of Brathwaite. Eighth wicket fell in the form of a netted man, who became the victim of Brathwaite by scoring 1 run. Ninth wicket dropped as Rashid Khan. Rashid became the fourth victim of Brathwaite by making 9 runs. On the last ball of the innings Syed Shirzad became the victim of Oshen Thomas.

The Caribbean innings started by Chris Gayle and Evelyn Lewis. There was a 21-run partnership for the first wicket between the two. Gayle got Daulat Jalan caught behind the wicket by seven runs. His catch was taken by IrkutAli . The second blow to the West Indies was felt as Ivain Lewis. Lewis caught 58 off 78 balls and hit Rashid Khan on the pads of Mohammad Nabi.

Dutta Zardan caught his ball in the hands of Noor Ali for good batting hitting. He scored 39 runs in 31 balls. West Indies were the fourth shock in the form of Shai Hope. Hope scored 77 runs in 92 balls, caught by Mohammad Rashid Khan at the hands of Mohammad Nabi. Nicholas Puran scored 58 runs while Jason Holder finished with 45 runs. Carlos Braithwaite remained unbeaten on 14 runs. On behalf of Afghanistan, Daulat Zardan has two Saeed Sajjad, Mo. Nabi and Rashid Khan got one success.

Two-two changes in both teams

There were two changes in the Caribbean team for this match. Evelyn Lewis and Kemar Roach have come in the team while Sunil Ambriss and Shannon Graubriel have been eliminated from the last eleven. DaulatZardan and Sharjad have been signed in the Afghanistan team while Hamid Hassan and Shahidi were not in the team.