Mission Mangal collection :Akshay Kumar’s film did a a smashing opening ,earned so many Crores 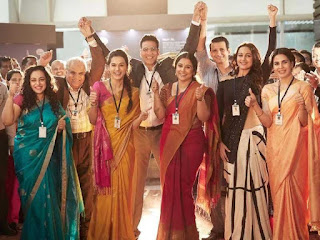 Mission Mangal collection :Akshay Kumar’s film did a a smashing opening ,earned so many Crores

Mission Mangal Box Office Collection Day 1: Bollywood giants Akshay Kumar, Vidya Balan and Sonakshi Sinha's film Mission Mangal have been released and the film opened the first day in Cinema hall  made a big bang. The movie 'Mission Mangal', released on August 15, has made a great opening, breaking the record of the rest of the films of Akshay Kumar.


According to media reports, Akshay Kumar's film 'Mission Mangal' has done very well in cities like Mumbai and Mysore. While this film made a collection of more than 9 crores in Mumbai, in Mysore, the film earned Rs 1.50 crores. Apart from earning, the film also won the hearts of critics. The film is one of the tremendous movies of the year 2019.


Let us know that to know the history behind the success of 'Mangalyaan' and to see the new story, the movie 'Mission Mangal' can definitely be seen. In this film, Akshay Kumar has played the role of scientist Rakesh Dhawan. Not only this, on every side this time too, Akshay Kumar has won the hearts of people with his acting.

The journey of the Indian scientist has been casted in a very great way by the director and all the stars has done a very good role of the scientist of Isro.