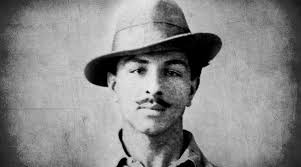 
Bhagat Singh was born on 27 September 1907 in Banga, Lyalpur district, now in Pakistan. At that time his uncles Ajit Singh and Shwan Singh were supporting the independence of India. Both of them were members of Gadar Pati run by Kartar Singh Sarabha. Both of these had a profound influence on Bhagat Singh. So they started hating the British from childhood.

Bhagat Singh was highly influenced by Kartar Singh Sarabha and Lala Lajpat Rai. The Jallianwala Bagh massacre on 13 April 1919 had a great impact on the child mind of Bhagat Singh.
Quitting studies at the National College of Lahore, Bhagat Singh began participating in the non-violence movement run by Bhagat Singh Mahatma Gandhi in 1920, in which Gandhiji was boycotting foreign goods.

At the age of 14, Bhagat Singh burnt books and clothes of government schools. After this, his posters started appearing in villages.


Bhagat Singh was previously a member of the Indian National Conference of Movement and Mahatma Gandhi. In 1921, when Gandhiji did not support the farmers after the Chaura Chaura assassination, he had a deep impact on Bhagat Singh. After that Chandrashekhar became a part of the Gadar party formed under Azad's leadership.

He, along with Chandrashekhar Azad, started the movement against the British. On 9 August 1925, the government treasury was looted at a small station called Kakori from the No. 8 Down Passenger which ran from Shahjahanpur to Lucknow. This incident is famous in history under the name Kakori Kand.

This incident was executed by Anjam Bhagat Singh, Ramprasad Bismil, Chandrashekhar Azad and prominent revolutionaries together.

After the Kakori incident, the British intensified the revolutionaries of the Hindustan Republic Association and reinstated their agents from place to place. Bhagat Singh and Sukhdev reached Lahore. There his uncle Sardar Kishan Singh opened a bed and told him to stay here and do milk business.

They wanted to get Bhagat Singh married and once even took the girl's men. Bhagat Singh used to take paper-pencil and calculate the milk, but never got the right account. Sukhdev himself used to drink a lot of milk and also gave others free food.

Bhagat Singh loved watching movies and eating rasgulla. He used to go to see the film with Rajguru and Yashpal whenever he had the chance. Charlie Chaplin was very fond of movies. Chandrasekhar Azad used to get very angry on this.

Bhagat Singh, along with Rajguru, killed British officer JP Sanders, Assistant Superintendent of Police, in Lahore on 17 December 1928. Chandrasekhar Azad fully assisted him in this.
Bhagat Singh, along with revolutionary partner Batukeshwar Dutt, threw bombs and pamphlets to awaken the British government on 8 April 1929 in the auditorium of the then Central Assembly of British India on Alipur Road, Delhi.

Bhagat Singh was not only a revolutionary patriot but a scholarly thinker, pen-rich, philosopher, thinker, writer, journalist and great human being. He had studied the revolutions of France, Ireland and Russia at a young age of 23 years.

Bhagat Singh spent about two years in jail. During this time he continued to express his revolutionary ideas by writing articles. His studies continued while in prison. His writings and letters to his family during that time are still mirrors of his thoughts.


In his articles he has described the capitalists as his enemy in many ways. He wrote that even if an Indian is the one who exploits the workers, he is their enemy. He also wrote an article in English in prison titled 'Why am I an atheist'? In prison, Bhagat Singh and his comrades went on hunger strike for 64 days. One of his companions, Yatindranath Das, gave up his life in a hunger strike.

On 23 March 1931, Bhagat Singh and his two associates Sukhdev and Rajguru were hanged. Before going to the gallows, he was reading a biography of 'Bismil' which was published by Bhajan Lal Bookseller, a publisher of Sindh (a province of present-day Pakistan) from Art Press, Sindh.