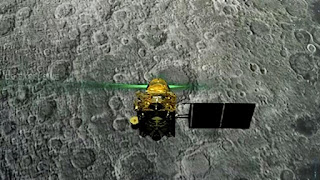 
Chandrayaan 2's (Chandrayaan 2) lander 'Vikram' lost contact with the ground station while landing on the moon last night. A senior ISRO official associated with the Chandrayaan-2 mission said on Saturday that the Indian Space Research Organization may have lost the 'Vikram' lander and the 'Pragyan' rover present in it. Earlier, when the lander was moving close to the lunar surface, only a few minutes before the scheduled soft landing, its contact with the control center at Earth broke. President of  ISRO KK  Sivan  said, 'The Vikram lander landed below the normal way to an altitude of 2.1 km from the lunar surface. After this, the lander lost contact with the earth. The data is being analyzed. Although there is no information about the future and status of India's moon lander Vikram, but the Chandrayaan-2 mission costing Rs 978 crore is not over.


An Indian Space Research Organization (ISRO) official told  requesting anonymity, "Only five percent of the mission - Lander Vikram and Pragyan Rover - has been lost, while the remaining 95 percent - Chandrayaan-2. Orbiter - Still orbiting the moon successfully. " One year mission period orbiter can send many pictures of the moon to ISRO. The official said that the orbiter can also take pictures of the lander and send it, so that its status can be known. The Chandrayaan-2 spacecraft has three sections - Orbiter (2,379 kg, eight payloads), Vikram (1,471 kg, four payloads) and Pragyan (27 kg, two payloads). Vikram separated from the orbiter on 2 September.


Chandrayaan-2 was first launched into space on 22 July through India's heavy rocket Geosynchronous Satellite Launch Vehicle-Mark 3 (GSLV Mk3). Let us tell you that Prime Minister Narendra Modi reached ISRO Center on Saturday morning after 'Chandrayaan-2' lander 'Vikram' lost contact with the ground station. Here, he not only encouraged the scientists but he said that I am with you and the whole country is with you. When PM Modi was walking out of Bangalore's Space Center, he embraced the  ISRO chairman and became very emotional during this time. 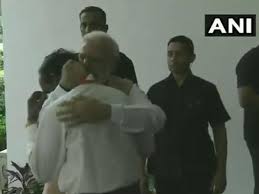