Chandrayaan-2 will create the history 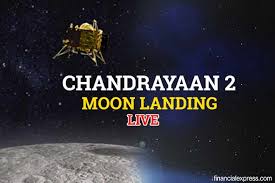 
'Chandrayaan-2' lander 'Vikram' is ready for a historic 'soft landing' on the lunar surface late tonight and Saturday and this moment for ISRO (ISRO) scientists Will be 'stopping the heart beats'. The people of India are eagerly waiting for the 'soft landing' clock on Friday-Saturday, the intervening night, praying for the success of this historic space leap of the country. Not only the country, but other nations of the world are also eyeing this mission. Its speed will be reduced 15 minutes before landing on the lunar surface in the early hours of Saturday. After 10 minutes and 30 seconds, when Vikram will be at an altitude of 7.4 kilometers, its speed will be done at 526 kilometers per hour.


Successful 'soft landing will make India the fourth country in the world after Russia, America and China to achieve this feat. With this, India will become the first country in the world to reach the moon's South Pole region, writing a new chapter in space history. Officials said that through the Prime Minister Narendra Modi quiz competition, around 60-70 high school students selected from across the country will be present at ISRO's Bengaluru center to have a direct view of this historic moment.

Lander 'Vikram will start going down to the moon on Saturday night between one and two o'clock and between one and a half to two and a half hours it will land in the South Pole region of the Earth's natural satellite. 'Vikram is currently about 35 kilometers from the lunar surface in the orbit, its nearest point from where it will start moving downwards towards the moon.

ISRO has stated that 'Chandrayaan-2 will attempt to land its lander in high plains between two pits-' Manginus C and 'Simpelius N' at latitude of 70 degrees south. Chairman of the Space Agency K. Sivan said that the proposed 'soft landing' is going to prove heart-stopping as ISRO has never done so before.

Explaining the process of landing on the moon, Sivan said that once the process starts from a distance of about 30 km, it will take 15 minutes to complete. After landing on the moon of the lander, the rover 'ignition' will come out from within it and will carry out its scientific work for a period of 14 days of Earth on a lunar day.

The Rover is a 27 kg six-wheel robotic vehicle equipped with artificial intelligence. Its name is 'Pragyan' which means 'intelligence'. It can travel up to 500 meters from the landing site and will use solar energy for its operations. It will send information to the lander and the lander will disseminate information to the Indian Deep Space Network located at Byalalu near Bengaluru.

According to ISRO, the lander is equipped with three scientific instruments that will carry out scientific experiments on the lunar surface and subsurface, while there are two scientific instruments with the rover that will strengthen understanding related to the lunar surface. According to ISRO, the South Pole region of the Moon is very interesting as it is much larger than the North Pole region and remains submerged in darkness. ISRO has said that not only the country but the world is eyeing this mission of India. People all over the world eagerly await the completion of this mission of India.
At the same time, former NASA astronaut Jerry Linanger has said that India's second lunar mission will not only help in taking forward the science and technology of the country, but will eventually help all those countries to establish a permanent presence on the moon. Will help those who have the ability to go into space.