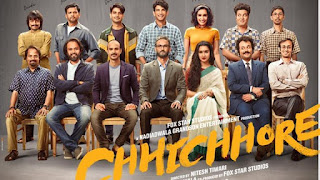 
The main purpose of romance comedy cinema should be to serve entertainment, but the film which gives the message along with the entertainment, will have to say icing on the cake. Director Nitesh Tiwari's 'Chichhore' is also the film of the same league, which has many layers. With these layers everyone will connect themselves to a rough layer. Whether it be the shattering memories of college days, the talk of dying in friendship, parenting, the pressure of promising students to be selected in a competitive exam or the ego between divorced spouses.

Raghav (Mohammad Samad), son of Anirudh (Sushant Singh Rajput), is very promising and hardworking in studies and writing and is going through the pressure of getting selected in the entrance exam. Anirudh is single parent after taking the divors from Maya (Shraddha Kapoor). When Raghav is not selected in the entrance exams, he is unable to bear the shock and tries to kill himself by jumping from a friend's building. His heart and brain are deeply hurt in trying to commit suicide. When Anirudh sees the son going out of his hands, he takes his hostel to the days of rescue to save the son. In the hostel, Maya's love for her befriends close friends like Seksa (Varun Sharma), Derek (Tahir Raj Bhasin), Acid (Naveen Polyshetti), Bewada (Saharsh Shukla), Chris Cross (Rohit Chauhan), Mummy (Tusshar Pandey) If you get, then the Rivalry of top students like Regi (Prateek Babbar). The body of Raghav, who has gone into deep unconsciousness, begins to respond with memories of his father Anirudh. Anirudh collects all these zigzag friends from his hostel. Anirudh tells Raghav how those infamous people in the hostel, known as Lodgers, tried to free themselves from the tag of Lodgers, but the story of Anirudh's past makes Raghav's condition critical. If Anirudh, the past of Maya and his friends will be able to save Raghav, you will have to watch the film.

Nitesh Tiwari is a sensitive  director and his qualities are also seen in 'Chhichhore'. He has depicted the atmosphere of the nineties very beautifully. Small details like loose jeans, Casio watches, Reynolds pens, Playboy magazines of that era have added color to his characters. Since he is also the co-writer of the film, he has shown the pressure of children getting selected in entrance or medical examinations. In an emotional scene of the film, Anirudh confides in front of his wife Maya and friends that I had brought a bottle of champagne so that after the son was selected, I would celebrate drinking and drinking with him. I told my son how to celebrate when elected, but did not tell him what to do if he did not pass the exam. Nitesh also strikes a good rapport between the scenes of the present and the flashbacks. The world of Bachelor Boys in Boys Hostel entertains the audience with comedy, chhichori dialogue, romance and raivalry. However, the film also has a glimpse of films like 'Three Idiots' which won the same Alexander.


In terms of performance, the film is rich. Sushant Singh Rajput has also lived well with the young Ani, the middle aged Anirudh. Shraddha Kapoor is also well known as Young and Machiara Maya. She is also beautiful in the film. Sushant and Shraddha's innocence is reflected in the chemistry. Varun Sharma's character as Seksa was loud, but he has entertained a lot with his loudness.