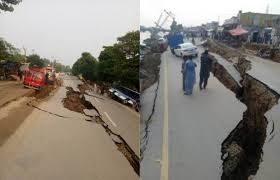 
The tremors of the quake were felt in several parts of the country including Delhi-NCR on Tuesday afternoon around 4.31 pm. Apart from Delhi NCR, earthquake tremors were also felt in Chandigarh and Jammu and Kashmir. After the earthquake, people suddenly came to panic and in many places people came out from inside their homes and offices.

According to Pakistani media reports, 8 people have died due to earthquake while more than 100 people have been injured in Pakistan-occupied Kashmir's Mirpur.
Earthquake causes heavy damage to Pakistan.

According to Pakistani media, the 5.8-magnitude earthquake on Tuesday afternoon shook many cities and northern parts of Pakistan including Islamabad, PoK, Peshawar, Rawalpindi and Lahore.

The sharp shock of the Don News earthquake was felt for about eight to ten seconds. The cities of Pakistan where earthquake tremors were felt are Sialkot, Sargodha, Mansehra, Gujarat, Chitral, Malkhand, Multan, Shangla, Bajaur, Swat, Sahiwal, Rahim Yar Kha and Mirpur.

Earthquake tremors were felt in several cities in the northern part of Pakistan, including Islamabad, Peshawar, Rawalpindi and Lahore. This information has been given in local media news. According to the news of Dawn News TV, tremors were felt for eight to ten seconds. The earthquake measured 5.7 on the Richter scale.

According to the European Mediterranean Seismological Center (EMSC), the epicenter was 173 km from Lahore.

Earthquake tremors in Jaipur,Delhi and many parts of North India  as well

Earthquake tremors were felt in Rajasthan capital Jaipur on Tuesday evening. No loss of life or property was reported from the earthquake. Meteorological Department officials said the tremor was felt around 4.31 pm in the evening. In many places, people came out of their homes and offices in panic.