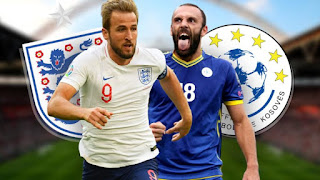 Today the European qualifiers league Group A match is going to be played between England and Kosovo.The the last one decade England had never lost his any game for qualifying in this tournament.They would like to keep this momentum going on by winning this match and want to move ahead for Euro 2020 finals.

This match is going to be played on Tuesday night at St Mary's in Southampton,they will find themselves on the cusp of another finals tournament after winning this game and continuing their winning momentum,The 3rd place is been acquired by the Czech republic in the group A has to play more four games.If this happen again then England will move into the second decade of qualifying and had a very hard competitor Spain in front of them.

Also the team of Kosovo is also very good and a tough team to battle with.From their last 4 qualifiers they had not lost any game,so this match is going to be very interesting to watch. Recenlty they had beaten Czech republic  and also looks very confident.


where to watch this game live:


you  can watch this game live on the following links given below :