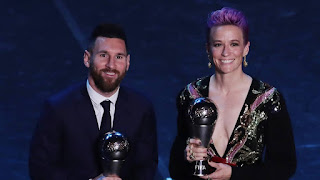 FIFA 2019 Best players awards were Held in Milan where Lionel Messi was awarded the Best Player 2019 Award. Lionel Messi has become the first player in the world to win this award six times. Cristiano Ronaldo is only one award behind him. On the other hand, the title of 'Woman of the Year' has been won by Megan Rapinoe.

Megan Rapinoe played an important role in winning the World Cup to the US team. At the award ceremony, US team coach Jill Ellis was honored with the 'Best Female Coach' award, while Liverpool goalkeeper Allison received the FIFA Best Goalkeeper of the Year Award.

• Christiano Ronaldo has won this award five times. In the year 2018, Luka Modarich of Croatia won the award, breaking the dominance of Messi and Ronaldo.


These awards are given annually by FIFA. The first ceremony of the Best FIFA Football Awards was held in 2016 for outstanding performance of football. Its opening ceremony took place in Zurich, Switzerland. These awards included a FIFA Fan Award which recognizes and honors a Best Fan. Lionel Messi was awarded the Best Player Award at the first awards ceremony.