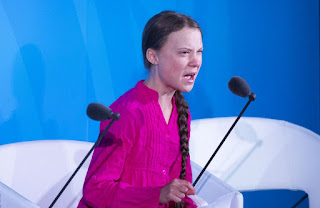 
Before the speech of Prime Minister Narendra Modi on climate change, 16-year-old environmental activist of Sweden Greta Thunberg's speech is becoming quite viral on social media. Climate change activist Greta Thunberg addressed the United Nations Climate Conference on Monday. Angry, Greta accused global leaders of betraying her generation by failing to deal with the emission of greenhouse gases. 16-year-old Greta asked, "How dare you (do this)?" The Swedish teenager, who is becoming the face of the youth movement against the stagnation of nations in combating climate change, began his address by saying, "Our message is that we are watching you." Laughed at this.


However, it soon became clear that the tone of his message is very serious. Greta said, "This is completely wrong. I shouldn't have been here. I was supposed to be in school across the ocean. She has taken a year off from her studies. She said, "You young people have come to us here with hope.
She  told the leaders, "You took away my dreams and childhood from your hollow words, yet I am among the lucky ones." People are suffering, people are dying, the whole ecology is collapsing. The climate activist said, "We are on the verge of mass extinction and you are talking about money and imaginary stories of economic development." How dare you?


She said that in his interactions with the leaders she was told that the youth are being listened to and the urgency is being understood. She said, "But how sad and angry I am ... because you have really understood the situation and I don't believe it." The worker said, "You are disappointing us. But the youth have begun to understand your betrayal. The eyes of future generations are on you and if you disappoint us, I will say that we will never forgive you.