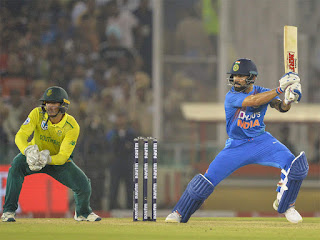 The Indian team took an unbeatable 1-0 lead in the three-match series by defeating South Africa by 7 wickets in the second T20 match played in Mohali on Wednesday. After losing the toss, the South African team came out to bat and scored 149 runs after losing 5 wickets in 20 overs and gave India a target of 150 runs to win. In response, India lost  wickets in 19 overs and scored 151 runs and won the match. For India, captain Virat Kohli scored an unbeaten 72 off 52 balls with the help of four fours and three sixes. Opener Shikhar Dhawan scored 40 runs off 31 balls. His innings included four fours and a six.


Quinton de Kock, captaining for the first time, could not win his team South Africa even after scoring a half-century. Captain Virat Kohli helped India win by playing the best innings on his hard work. Kohli was adjudged Man of the Match for his innings. India got off to chase the target with ease, Rohit Sharma got the first blow on the fifth ball of the fourth over. Rohit, who scored 12 runs, returned to the pavilion for a total of 33 runs.


Dhawan and Kohli then shared a 61-run partnership for the second wicket. Dhawan was heading towards the half-century but a fine catch from David Miller put an end to his innings. He hit four fours and a six in his innings. Rishabh Pant could not stop his bat once again. Tabrez Shamsi caught his catch on the ball of Bijren Fortune playing debut match.


Kohli, meanwhile, completed his half-century. With this, Kohli has become the highest run-scorer in T20. In this case, he has left behind Rohit Sharma. Kohli has now scored 2440 runs in T20. At the same time, Rohit has 2434 runs. Shreyas Iyer remained unbeaten on 16 runs and returned with the captain winning the team. Iyer hit the winning four for India.


South Africa had a decent start and a 31-run partnership between captain Quinton de Kock and Reeja Hendrix for the first wicket. In the fourth over, Deepak Chahar gave the first blow to South Africa. Chahar had Hendrix caught by Washington Sundar and returned to the pavilion. Hendrix was out after scoring 6 runs.

South African captain Quinton de Kock was batting. Navdeep Saini gave him the second blow to South Africa by getting caught by Virat Kohli in the 12th over. De Cock was dismissed after scoring 52 runs. Jadeja caught Rasi van der Dussen on his own ball and gave South Africa a third blow. Deepa Chahar was caught by Jadeja in the 18th over by Temba Bavuma giving South Africa a fourth blow. 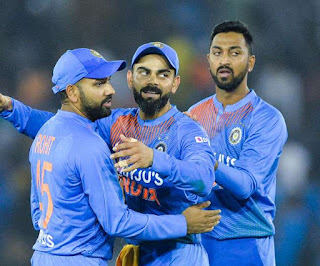 
Team India captain Virat Kohli won the toss and decided to bowl and invited South Africa to bat first. There was no change in the Indian team. Three players are making their T20I debut for South Africa. The team's new captain Quinton de Kock has given the opportunity to Björn Fortin, Enrich Nortes and Temba Bavuma in the playing eleven.