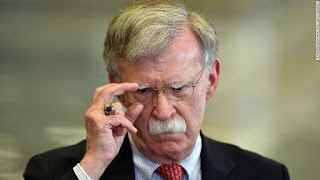 The American President Donald Trump had fired his national security advisor Mr John Bolton by twitting on Tuesday. He said that he is not agreed with the Suggestion of Mr Bolton as compared to others staffs.


Bolton had also twitted after that,i supposed to resign last night but president trump said that lets talk for it tomorrow.

They will finalize this by Wednesday lets see what is going to happen.