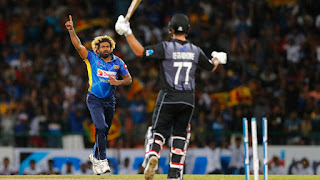 
Lasith Malinga created new history in T20 cricket, 4 wickets from 4 balls including hat-trick
Sri Lankan cricket team captain Lasith Malinga created a new history in the three-match T20 series being played against New Zealand. Malinga took four wickets for the first time in the shortest format of cricket in the last match of the series. It also included a hat-trick. Although in ODI cricket Malinga has done this amazing 2007 before. He is the only bowler in ODI cricket who took four wickets from four balls.

Malinga made the four New Zealand batsmen his prey. He bowled cleanly to Colin Munro for 12 off the third ball of the third over of the New Zealand innings. He then dismissed James Rutherford on the fourth ball LBW at zero. He took the third wicket of Grand Home. He made the grand home clean bowled at zero. He made his fourth victim, Rose  Taylor. He dismissed Taylor at LBW.


In this match, Malinga made his fifth victim Tim Siefert. He got Tim caught by Gunathilaka for 8 runs. He took 5 wickets for 6 runs in 4 overs. Malinga had an economy rate of 1.50. He also threw an over maiden.


Most hat tricks in international cricket