Motorola has launched a new affordable Moto E6s of its Moto E series in the Indian market. If seen, the Moto E6S is indeed the Indian avatar of Moto E6 Plus launched at IFA 2019. The phone has a MediaTek Helio P22 processor and it runs on Android 9 Pie. This is the first phone in the Moto E series in which two rear cameras have been given. The battery of this phone can be taken out. The Moto E6S has a 6.1 inch display and Waterdrop Notch.

Moto E6s price and its availability

Moto E There will be only one variant of - 64 GB storage with 4 GB RAM. It will be sold for Rs 7,999. The new Motorola phone comes in rich cornberry and polished graphite colors. It will be on for sale from September 23 on the e-commerce site Flipkart.
Talking about the launch offers of Moto E6S, with this handset, Jio will get a cashback of Rs 2,200. A voucher of Rs 3,000 will be given by Cleartrip. 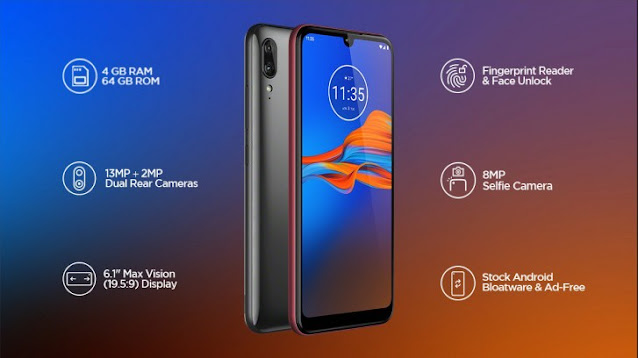 The dual-sim Moto E6S runs on Android Pie. It comes with stock interface. But Motorola has not told anything regarding giving Android 10 update to the phone. The Moto E6S has a 6.1-inch full-HD + (720x1560 pixels) OLED MAX  Vision display. Its aspect ratio is 19.5: 9. The octa-core MediaTek Helio P22 processor has been used for speed and multitasking. There will be 4 GB RAM with it.
The Moto E6S has two rear cameras, a 13-megapixel primary sensor, its aperture F / 2.0 and a 2-megapixel depth sensor. There will be an 8 megapixel front camera for selfie and video calling, its aperture is F / 2.0. Storage will be 64 GB and with the help of MicroSD card it is possible to increase the storage to 512 GB.