Redmi 8A launched In India 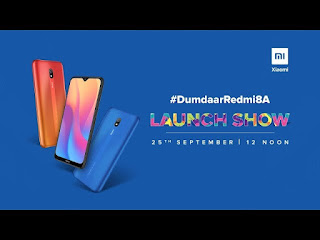 Redmi 8A launched In India


Redmi 8A has been launched in India. It is the latest phone of the company's popular Redmi A series. The Redmi 8A handset from the Chinese company comes with the Aura Web Grip design and has a P2I Nano coating to avoid water splatter. The handset is equipped with Waterdrop display notch. The company has named it "dot notch".


Redmi 8A will be available in three color variants. The phone will come with FM radio to woo the youth. The smartphone comes with fast charging support and has a 5,000 mAh battery. Xiaomi says that Redmi 8A will challenge Realme C2 and Samsung Galaxy M10 in the market.

Redmi 8A prices in India


Xiaomi Has said that the sale of Redmi 8A will be on Flipkart and Me.com. The first sale will be held on September 29. The handset will be available in Me Home stores from September 30.

Remember that Xiaomi launched Redmi 7A in July this year at an initial price of Rs 5,999. There will be 2 GB RAM and 16 GB storage variants at this price. During the live stream, Xiaomi India chief Manu Kumar Jain also indicated that Redmi 8 will also be launched soon.


The dual-sim Redmi 8A runs on MIUI 10 based on Android Pie. It has a 6.22-inch HD + display, with 19: 9 aspect ratios. The screen has the protection of Corning Gorilla Glass 5. The phone has a Qualcomm Snapdragon 439 processor. Up to 3 GB RAM is available for Jugalbandi.

The Redmi 8A has a 12-megapixel Sony IMX363 sensor on the rear. It comes with f / 1.8 lens. The smartphone also has an 8-megapixel selfie camera on the front panel. Apart from this, the phone will come with preloaded features like AI Portrait Mode and AI Scene Detection. The phone also has an AI Face Unlock feature.

Redmi 8A's inbuilt storage is 32 GB and it will be possible to use a microSD card up to 512 GB if needed. Connectivity features include 4G LTE, Wi-Fi, Bluetooth 5, GPS / A-GPS, FM radio, USB Type-C and 3.5mm headphone jack. There is also a fingerprint sensor on the back side.