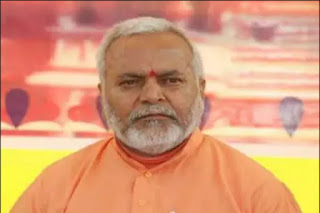 Chinmayananda has no rape case, sues girl for ransom

After Swami Chinmayananda went to jail, when the aggrieved student was asked if he was satisfied with the action, his reply was that he is not satisfied at all because the SIT has imposed mild currents. He does not seem to get justice. He said that he has nothing to do with asking for a ransom, a new aspect has been taken to weaken his case.


BJP leader Swami Chinmayanand, surrounded by allegations of rape of a law student, was arrested by the SIT and sent to jail on Friday but no rape case was filed against him. While the SIT has lodged a case against the girl who made the charge, blackmailing Chinmayananda and demanding a ransom of 5 crores, and sent three of her colleagues to jail. The girl has not been arrested yet. The accusing girl has expressed surprise. Swami Chinmayananda was finally arrested by the SIT from her ashram. He was given medical treatment, then he was produced in the court from where he was sent to judicial custody for 14 days. The SIT says that they have confessed all other crimes apart from the rape.


SIT chief Naveen Arora said, 'The owner has accepted almost everything that has been alleged and like he has accepted his presence, he has accepted pornography, he has accepted body massage, even he has fully accepted Instead of rape, Chinmayananda has been booked under IPC 376C in which he has a position in his law college. Use the girl has been accused of making physical relationship luring. It is unhappy with the accusation against Chinmayananda. The accusing girl says, "When I went here to make a statement of 161 in front of the SIT, I had told that day that I was raped, in what manner it was told, everything." Despite this, 376 C was imposed on Chinmayananda, the same thing was feared.


The SIT says that Chinmayananda does not answer the question of raping the girl. No charge is proved by registering an FIR, but why the SIT did not file an FIR for rape is not clear. The SI has also filed a case against the accused girl and her three associates Sanjay Singh, Vikram Singh and Sachin Sengar for blaming Chinmayanand for a ransom of Rs 5 crore. Police arrested the three companions and sent them to jail but the girl has not been arrested yet. The SIT says that to prove the case properly, it is trying to re-gather the evidence which has been deleted.