The sky is pink trailer released 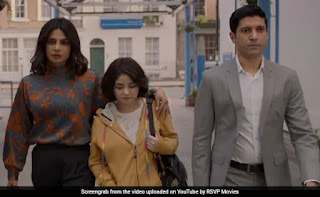 Trailer of Sky is Pink released


The trailer of actress Priyanka Chopra and Farhan Akhtar's most awaited upcoming film 'The Sky Is Pink' has been released. This trailer of the film is also very much liked by the fans. The trailer begins with Priyanka Chopra and Farhan Akhtar's lovestory. Between laughter, comedy and romance, the distance comes in these two when they find out that their daughter Ayesha i.e. Zaira Wasim has a problem in her lungs. This film is based on the true story. In this film, apart from Priyanka and Farhan, Zaira Wasim and Rohit Saraf are also playing the lead roles.

In the trailer of 'The Sky Is Pink', actress Zaira Wasim describes herself as 'Villain' in Priyanka Chopra and Farhan's life. Let me tell you that Priyanka Chopra gave the information about the release of the trailer of her film a day in advance. Sharing the film's poster on her Instagram account, the actress wrote, 'I am bringing this crazy family.'


Let me tell you that the story of her parents is shown in 'The Sky is Pink' through a teenage girl who is suffering from serious illness. In the film, Priyanka Chopra  plays the child's mother Aditi, while Farhan Akhtar plays her father Nikhil. This film has been directed by Sonali Bose. The film will be released in October this year, while its world premiere will be done on September 13 at the Toronto Film Festival.