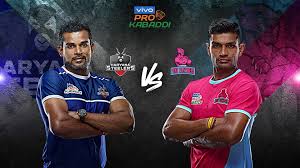 The Jaipur pink panthers will face Haryana Steelers in Vivo pro Kabaddi League season seven in Kolkata on Wednesday as the 84th match of the pro kabaddi league in Kolkata.

The 3rd match which was played between both the teams earlier Jaipur pink panther had defeated Haryana steelers by 37-21 , The team of Haryana players had prepared themselves very well for the upcoming match on Wednesday.