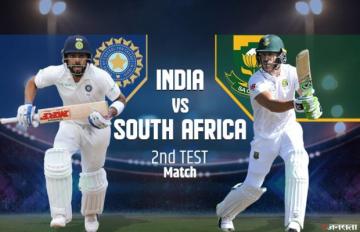 By the end of the first day's game in the second Test match being played between India and South Africa, Team India seems to be reaching a strong position. After winning the toss and batting first, the Indian team scored 273 runs till the end of the day, thanks to the brilliant centuries of Mayank Agarwal (108) and Fifties of Cheteshwar Pujara (58) and Virat Kohli (63 *). The Indian team lost 3 wickets during this period. The only successful bowler for South Africa was Kagiso Rabada, who took all three wickets to his account. By the end of the day's play, captain Virat Kohli along with vice-captain Ajinkya Rahane (18 *) returned to the unbeaten crease. The umpires stopped the first day's play 4.5 overs earlier due to poor light.

Earlier, the pair of Rohit Sharma and Mayank Agarwal started the innings. Rohit, who scored a century in both innings of the Visakhapatnam Test, was able to score just 14 runs in the first innings here and Rabada dodged him on his swing and bounce. The ball kissed the outer edge of Rohit's bat directly into the gloves of wicketkeeper Quinton de Cock. After this, Cheteshwar Pujara came to the crease to play Mayank and both batsmen took the team's score to 77 by the end of the first session.
After the break, the pair of Mayank Agarwal and Pujara once again led the game. Both added 138 runs for the second wicket. Meanwhile, both batsmen completed their half-centuries. Everything was going well from the Indian team's perspective this season that Rabada gave Cheteshwar Pujara (58) the second blow to the out-team India here shortly before tea time. In his half-century innings, Pujara contributed 9 fours and 1 six. After Pujara, Virat Kohli came to command the team. Pujara returned to 86 and Kohli 0 at the end of this season's game. 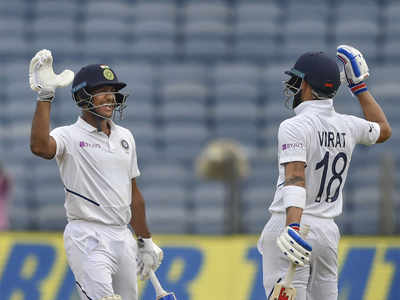 When the game of the third and final session of the day started, Mayank Agarwal suddenly put his run speed in fourth gear. He scored his personal score of 99 with 2 sixes off 2 consecutive balls of Keshav Maharaj and then hit a four off Philander to complete his century. Mayank completed two centuries in his two consecutive Tests. However, he could not take his innings much further and on the score of 108, he was given a third blow by Kagiso Rabada caught by skipper Faf du Plessis at slip. Mayank hit 2 sixes and 16 fours in this innings.

From here Ajinkya Rahane came to support captain Virat Kohli and both the batsmen remained frozen at the crease till the end of the day's game. Both batsmen batted extremely well in the beginning. Later, Virat Kohli gave pace to his rung and now he is at 63 not out with the help of 10 fours in 105 balls. Rahane, on the other hand, has maintained his composure and is still on 18 off 70 balls. Only three fours have come off his bat so far.

For the South African team, none of the bowlers other than Kagiso Rabada failed to impress on the first day of the match. Captain Faf du Plessis used six of his bowlers. Left-arm spinner Keshav Maharaj bowled the most 29 overs, but he has not got any wickets for 89 runs. On the other hand, Rabada has given 3 wickets for 48 runs after throwing 18.1 overs.